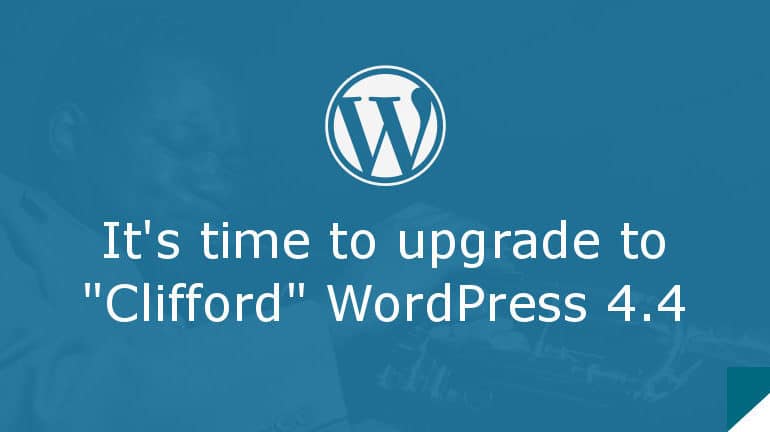 Frankly, this is not an easy question to answer.

The answer is completely dependent upon what type of site you are running, how important it is to ensure maximum uptime for the site, and how skilled you are at fixing problems like a failed WordPress upgrade. Even after determining a safe amount of time to wait before upgrading, there are a number of things that you should do before upgrading.

WordPress upgrades from our perspective

As a new WordPress version release approaches, we actively work to ensure that there aren’t any problems with our themes or plugins that would cause them to fail when the new version comes out. Personally, I run the latest development code for weeks on my personal sites and on my development sites to try my best to catch any and all bugs or potential problems.

So far, the 4.4.2 release has been kind to us. The internals of WordPress really didn’t change, so we didn’t have to update any of our code specifically for the new version release.

However, this isn’t to say that there will not be any problems. Problems always have a way of appearing out of nowhere.

Even though we have yet to find any issues related to the 4.4.2 release, some customers have still had issues after the new version release. So far, all of these have been caused either by plugins that have not been maintained or by custom code running on the customer’s site that was not tested on the new version. Please keep in mind that themes aren’t the only source of potential problems as a site’s plugins and customization can also cause upgrade woes.

So, this brings me to some basic steps that should be followed to give you the best chance at a safe upgrade on your site.

Five things to do before upgrading WordPress

Now that WordPress is so easy to upgrade, you can simply click a button and let the software take care of it for you, it becomes very easy to forget that this process can fail. If the upgrade does fail, your site could be down for hours or days or you could lose valuable data from your site (posts, pages, etc).

Doing the following won’t guarantee that you won’t have problems, but adhering to these recommendations will go a long way toward minimizing the risks of upgrading and will allow you to recover better in case of lost data.

How important is your site?

Your site is a source of income for you, has very high traffic, or could be severely hurt by any downtime. A new WordPress version just came out. Should you upgrade right now? Frankly, if you can’t accept any amount of downtime, wait a minimum of two weeks after the new version comes out. This will give the WordPress developers enough time to identify and fix any major issues that were found immediately after release. The same goes for giving your plugin and theme developers enough time to ensure that there aren’t any problems.

If your site is just a hobby site or you don’t mind having some downtime, go ahead and update as soon as you are ready. You could end up finding a problem that helps out the community.

To hit the main point again: If you rely on your site and maximum uptime is important to you, wait at least two weeks before upgrading to a new version of WordPress.

This type of solution is overkill for most people, and I really have a hard time recommending it to the average user. However, I do think that every person who runs a WordPress site that needs to have maximum uptime should have at least one test site. What makes a good test site? I’m glad you asked.

For those of you that don’t like the massive amount of information I’ve thrown up here and just want quick answers, here’s a summary:

The Digital Agenda Wins Clutch Leader Award For The Fourth Time In A Row!

Web design trends that make an impact in 2019

5 Ways SEO Helps You To Get Sales

How to Choose The Best Web Design Agency in Tampa